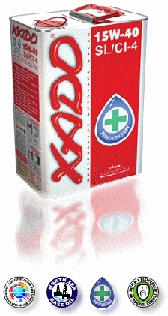 The Low Carbon Vehicle Partnership is an action and advisory group, established in 2003 to take a lead in accelerating the shift to low carbon vehicles and fuels in the UK and to help ensure that UK business can benefit from that shift.

XADO is a Natural product that is Environmentally Friendly. It is a form of ‘NANO Technology’; the process takes place at atomic levels, but produces macro effects. 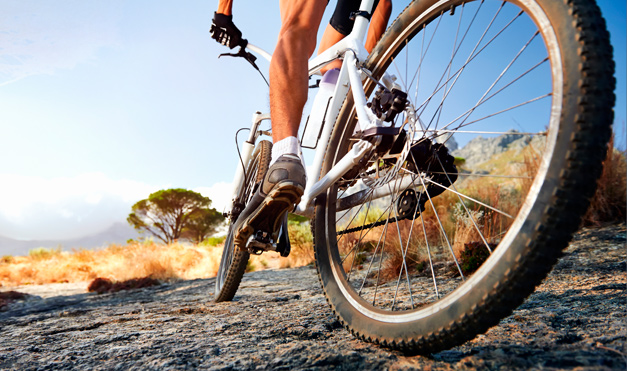 The process of revitalization has wide ranging applications. 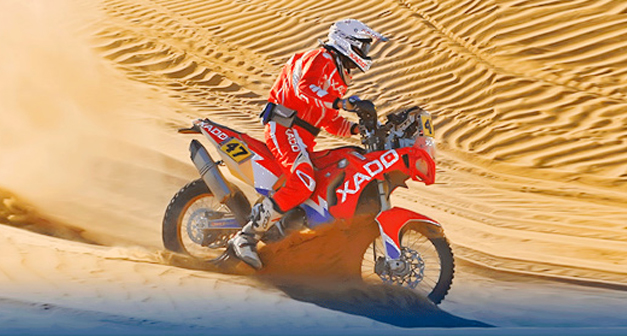 XADO treatment is an advanced form of Nano Technology which takes place at the atomic level and is principally based upon our worldwide patented compound which we call our “Revitalizants”.

XADO Technology. Extends the life of machinery. Reduces the release of CO, CO2 and NOx 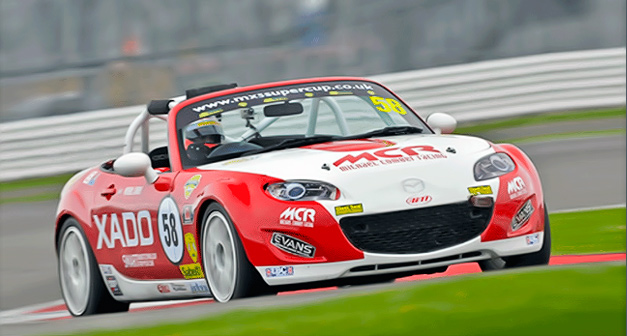 XADO Chemical Group is an International Group of Companies, with our own scientific research and development laboratories backed by our own high-tech production facilities.

We are often asked what type of clients we supply. They are too numerous to list them all, however they range from multi national companies to banks, engineering firms to local enterprises and individuals.

Every driver knows that changing the oil without flushing the engine can results in addtional taring and redices the protective properties of the oil. 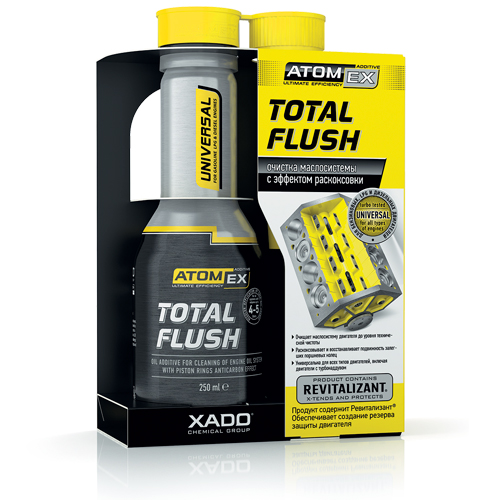 A new product has been released in the third generation line of 1 Stage revitalizants: 1 Stage Transmission gel-revitalizant for gear boxes.

XADO has started to manufacture AtomEx, a new series of products with revitalizant. These are hi-tech products, additives and cleaners for engine fuel and oil systems.

We’d like to introduce you a new product from a line of gels-revitalizants “XADO Revitalizant EX120 for gasoline engine”!

From the 24th till the 27th of August the 15th Moscow international specialized exhibition of spare parts, equipment and maintenance “Automechanika Moscow. Motorshow/ MIMS 2011” took place in the capital of the Russian Federation.

On May 25-29 the 19-th International SIA-2011 Motor Show took place in Kyiv. About 500 companies from over 20 countries have gathered at the exhibition this year.

On April 06 the presentation of new cars of the XADO Motorsport Team took place at “Avtograd” in Kharkov. For the first time the journalists and visitors could have a kind of the rally car test driving as a navigator with the pilot Stanislav Besedin – the champion of the Ukrainian Rally Cup 2010.

Attention All Manufacturers and Industry!

A new specialized website of the Industrial Department of XADO Chemical Group, xadoindustrial.com, hasbegun its work.

The main new development of the season, ATOMIC METALL CONDITIONER, has got now two variants of package – a trade and a gift one.

The three-component formula, containing sliding agent, revitalizant and metal conditioner, was used in the AMC production for the first time. From now on Metal Conditioners solve two tasks simultaneously: the traditional one – improve lubricating properties of the oil, and the new one – modify friction surfaces (due to the revitalization effect).

The greatest world event in the field of auto parts and automobile service – the international fair Automechanika 2010 – was held in Frankfort on the Main. This exhibition takes place in the middle of September once in two years. Automobile industry representatives from all over the world come here to demonstrate their best achievements. This year 4471 companies from almost 80 countries took part in the forum, the exhibition area occupied 270 500 m2.

The large worldwide auto show called Moscow International Automobile Show / MIAS 2010 was held from August 27th till September 5th in Crocus Expo International Exhibition Center. The part of the show was Motor Show 2010 powered by Automechanika which is a specialized exhibition of auto parts, car components and after-sales service.

XADO Chemical Concern presents a new product — 1 STAGE revitalizant for engines. Today it is the most efficient product of the Revitalizant line.

XADO gel-revitalizant for petrol engines has received a converted TÜV certificate. TÜV is the most authoritative non-government organization specializing in product testing, qualification and certification. (German TÜV - Technischer Uberwachungs-Verein). A TUV certificate is highly valuated and trusted by German and European consumers

Many of our clients ask for test reports as evidence of the effects of XADO. We are happy to provide the following XADO test reports. They show the real improvement that XADO can make to performance and particularly to the reduction of polluting particulates and NOX.

TÜV Thüringen, Germany one of the worlds leading inspection agencies confirms the effectiveness of Xado.

XADO revitalizing claims were extensively tested at the TUV testing center the Technical University of Zwickau, Germany. Over a period of several months TÜV Technicians tested, recorded and compared engine performance before and after using XADO.

TÜV approval and the certification are without question one of the most strictest and comprehensive testing procedures in the world and involves rigorous testing and verification that the product satisfies the strictest European regulations for the industry in which the product was designed. 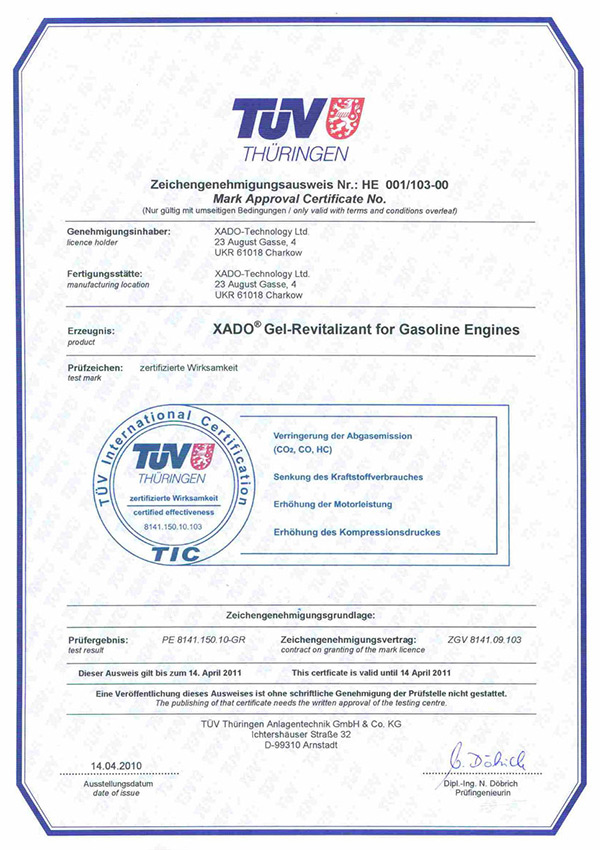 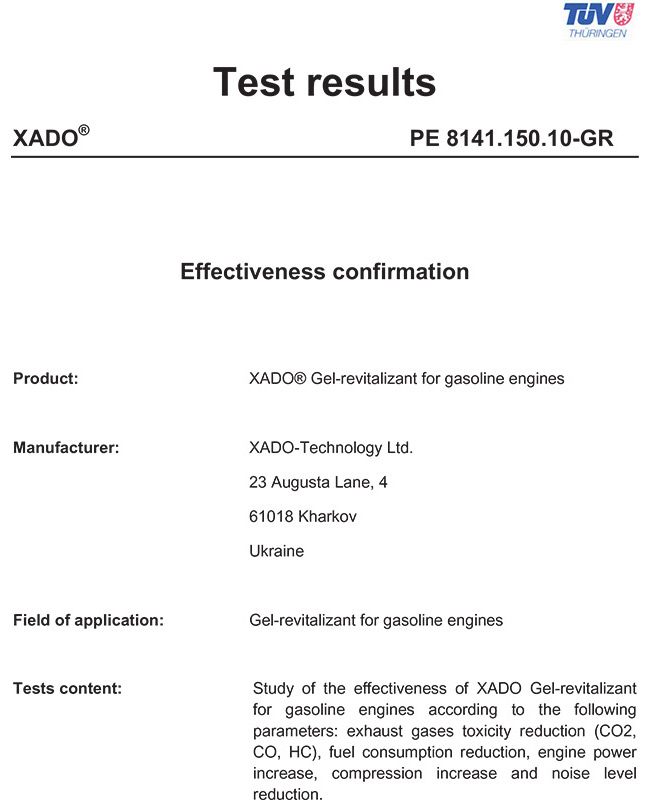 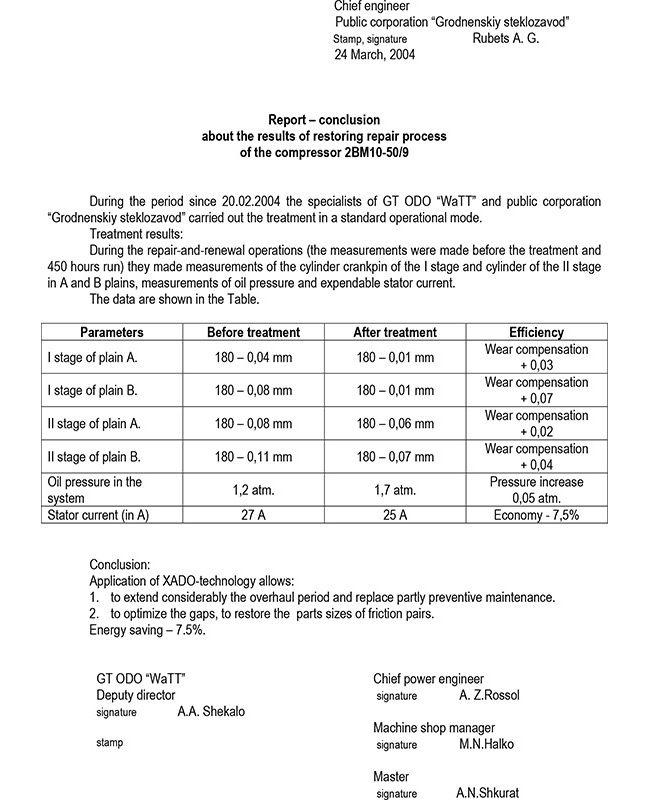 TÜV also confirmed that the XADO CERMET layer created by the treatment, optimised the surface of the engine cylinder walls, which led to the reduce fuel consumption, increase compression and reduce exhaust emissions.

These results overwhelmingly confirm the effectiveness of XADO.

The following are two additional conclusive vehicle engine tests. These are PDF files which may take a few moments to load in a new window, so be patient. 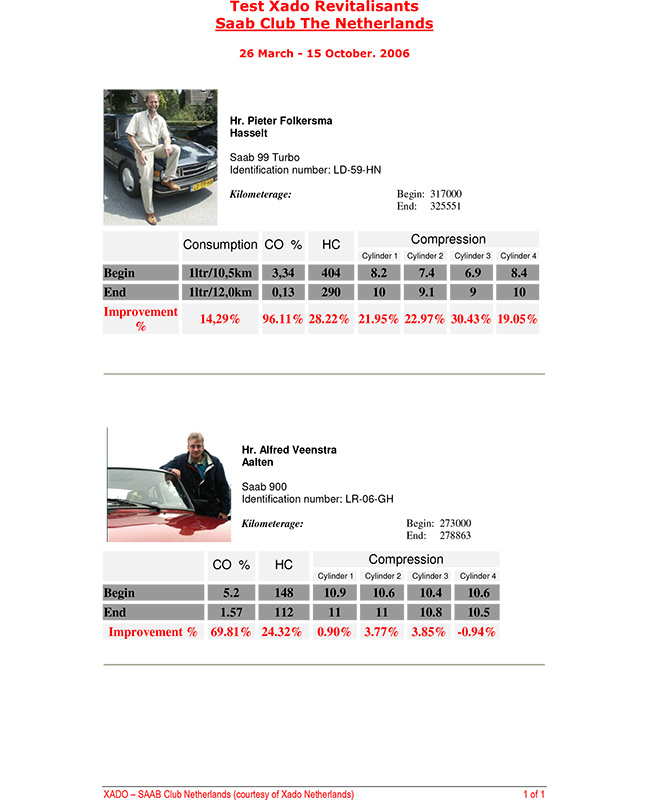 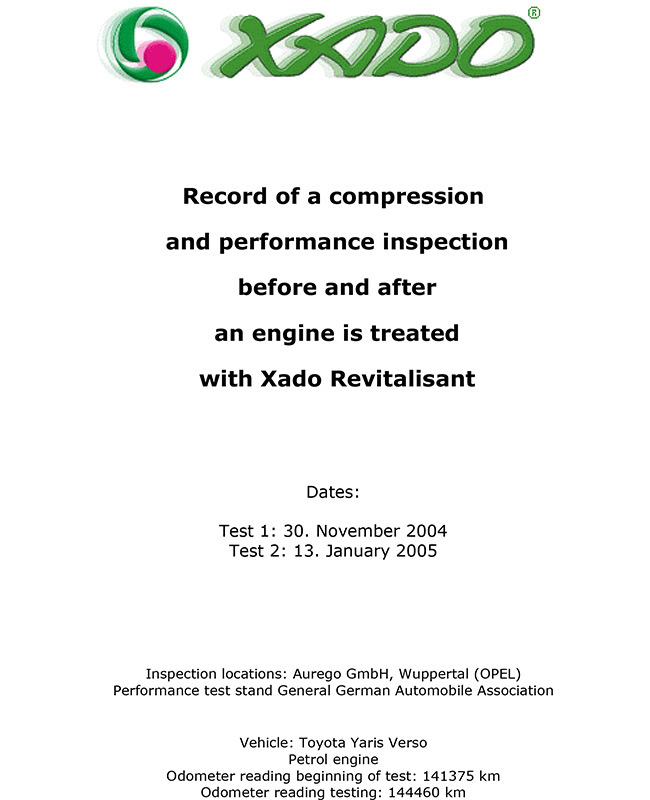 The revitalization potential has revolutionized the contemporary ideas of vehicle and mechanism operation and repair. Scientific while beautiful in its simplicity, the concept of the wear process reversal is embodied in XADO products.

Xado Motorsport continued their successes in 2009 with a sweep of trophies throughout the season.

"The London Ceremony Bus" Company is not in London, but in the Belgian town of Kapellen. They company have a fleet of rare London buses for hire and due to their age the vehicles require regular servicing and inspection every 3 months.

This year XADO makes its debut at one of the largest European car components, spare parts and accessories exhibition «Automechanika», which takes place in Frankfurt (Germany) from 16 till 21 of September, 2008.

We would like to invite all our friends, partners and colleagues to visit our stand at the largest international motor show in Moscow!

On the 5th and 6th of September XADO Motorsport took part in the second stage of the Ukrainian championship “ERSTE – Mountain race” in Sevastopol. Their debut was a success!

On the 15th of April XADO MOTORSPORT was presented to the worlds media at the “XADO-Service” autocomplex.

XADO 10W-40 Diesel Truck oil has been officially tested and approved by MAN trucks. This confirms that not only is XADO Atomic Oil 80W-90 GL 3/4/5 of the highest quality but it is officially approved for use during MAN's warranty period.

We are glad to invite all our partners, colleagues and friends to visit XADO at the International exhibition “INTERAUTO 2007”.

London racing driver James Heffernan clinched two podium finishes in rounds seven and eight of the Formula Renault BARC Championship at Norfolk's Snetterton circuit on 11th/12th August. He finished second in Saturday's round seven, following up with third place in round eight on Sunday. The results move him up to fifth in the Club Class standings, just six points behind the third placed driver after eight of 12 rounds.

Congratulations to the Russian Nikolay Valuev - WBA World Super Heavy Weight Champion who defended his title in a fight with the American boxer Jameel McCline!

The Russian Football Premier League has started. XADO is one of the main sponsors of the event. During the season of 2007 you can watch all the football matches on the ORT channel.

Congratulations to our partners and to the "KAMAZ-Master" t??m which held out in difficult conditions and came the second place in the "Paris-Dakar" Rally!

Congratulations to Nikolai Valuev the Russian super heavyweight. Last Saturday Nikolai won his fight against the American Boxer Monte Barrett with a technical knockout in the 11th round, successfully defended his WBA World Championship title.

XADO gels in the aerosol packages!

Now you can buy XADO gels-revitalizants in a modern and very convenient aerosol package!

Xado UK and JH Motorsport make podium position at Croft. The team competes in the BARC Formula Renault championship and produced a strong performance despite the rain and testing conditions.

On the 3d of June Russian boxer Nikolay Valuev defended his title of WBA world champion. In Hanover (Germany) he knocked out his challenger Owen Back in the third round.

One of the largest and most famous exhibitions in Eastern Europe – the 14th International auto show "SIA 2006" – took place at the National complex “Expo centre of Ukraine” in Kiev from 23 till 28 of May.

We congratulate all the fans of the Spanish Football Club Seville with the victory in 2006 UEFA CUP FINAL and all the football fans – a first-class football game!

XADO Antifreezes (concentrates on the basis of monoethylene glycol having - 64 °C freezing-point in mixture with water 2:1) are offered in a new type of packaging - 4 liter cans.

Motor oil XADO 5W-40 City Line SL/CF (semi-synthetic motor oil with synthetic viscosity) was tested for GM Opel approval in the Central laboratory successfully and is recommended officially for application in GM/Opel vehicles during warranty and after-warranty service, where motor oils with the requirements GM-LL-B-025 should be used.

We are happy to congratulate Russian team KAMAZ 4911 EXTREME (pilot Vladimir Chagin, navigator Stanislav Konopko, mechanic Eduard Nikolaev), the winners of the final round of the World Cup Championship in off-road rally – 2005!

Mineral motor oil 15W-40 in 4 L packaging is produced now in cans of two designs: for Commonwealth of Independent States and foreign countries.

13 years running Kiev becomes the place of the prestigious parade of novelties elaborated by the different leading auto manufacturers of the world.

The most popular semi-synthetic oil in the Euro packing

The semi-synthetic oil 10W-40 XADO ATOMIC is the next kind of oil in the export series of XADO ATOMIC OILs which entered the market after the mineral oil 15W-40.

With all our heart we congratulate the “KAMAZ- Master” team and KAMAZ crew ¹ 520 (Kabirov, Belyaev, Mokeev), who became the winners in the transcontinental supermarathon race “Barcelona-Dakar” in the category of trucks!!!n the official website of the API’s Engine Oil Licensing and Certification System, license ¹ 2215.

For the attention Diesel Truck Owner!

Chemical Concern XADO produced and put on sale the Synthetic Motor Oil XADO Atomic Oil 0W-30 SL/CF. This is a multigrade easy-flowing synthetic motor oil of ultra class. This motor oil is formulated on basis of fully synthetic base oils of high quality: esters and polyalphaolefin (PAO) made by the leading European producers.

The maintenance service stations “XADO-service” provide not only traditional autoservice but also offer guaranteed treatment by XADO-technology. A new XADO service station and a training center have been opened recently.

From 25th to 30th of May Kiev Exhibition Center became a real pilgrimage of Ukrainian motorists. There was held a traditional 12th International Auto Show SIA-2004. About half a million people came to see this show for one week.

XADO Revitalizant prolongs the life of the unique relic – the oldest working clock in Europe!