In most cases, during vehicle operation a coolant may change its colour to brown which happens due to rust and sediments on the cooling system elements. It is usually caused by usage of water as an operational fluid or application of low- quality antifreeze.

With a help of anticorrosive, stabilizing or washing additives the replaced coolant starts to clean the system which may also cause the change of colour. If the antifreeze becomes yellow or fading its colour this may indicate a complete coolant failure or engine overheating.

There is certain stability in the temperature of the antifreeze and it changes its colour according to the functioning time at certain temperature indicating the intensity of engine combustion.

Depending on the condition of the cooling system and amount of sediments and rust in the cooling jacket, there is a specific time for the change of the antifreeze colour to take place. If the engine has lots of different contaminations the discoloration will occur very fast.

In order to avoid such problems, it is advised to flush the cooling system before changing the antifreeze. 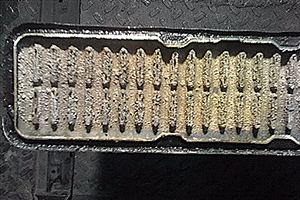